In late April this year, at a global summit arranged to coincide with Earth Day, United States President Joe Biden announced ambitious new goals for tackling climate change, and set a challenge for all other nations to do the same.

One country that did not meet that challenge at the Earth Day summit was Australia, whose prime minister, Scott Morrison, reiterated previous commitments, but did not bow to pressure to increase targets.

According to The Carbon Club, a new book by Australian reporter Marian Wilkinson, the Morrison government is continuing a pattern of resistance and inaction that has plagued Australia’s climate change policy for two decades.

Wilkinson, who is a member of the International Consortium of Investigative Journalists, has spent years uncovering a network of business leaders, politicians, climate sceptic scientists and right wing think tanks that have fought to destroy Australia’s climate change policies, joining an international campaign to undermine confidence in climate science and derail global action to combat climate change.

This edited extract from The Carbon Club covers the political events in Australia in 2018 when the then-prime minister, Malcolm Turnbull, was torn down in a party coup aided by climate skeptics who wanted to blow up his climate and energy policy. 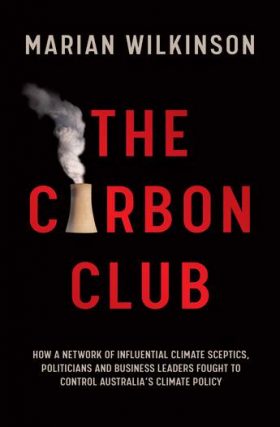 Australia’s former prime minister, Tony Abbott, arrived in London pretty pleased with himself. After helping to kill off the Clean Energy Target, he was now being welcomed as an honoured guest of the Global Warming Policy Foundation. The United Kingdom-based climate-skeptic think tank founded by former chancellor, Nigel Lawson, had invited Abbott to give its annual lecture in October 2017.

Abbott was following in the footsteps of his heroes ex-Prime Minister John Howard and Cardinal George Pell, who had both stood at this podium before him. His lecture had the cautious title “Daring to doubt,” but even he admitted it would best be remembered as his “Sacrificing goats” speech.

In a provocative attack on climate policies, Abbott compared efforts to reduce greenhouse gas emissions to slow climate change as akin to animal sacrifice by ancient priests. “Primitive people once killed goats to appease the volcano gods,” he told the audience. “We’re more sophisticated now but are still sacrificing our industries and our living standards to the climate gods to little more effect.” Abbott went on to roundly criticise the scientific consensus on climate science. “Beware the pronouncement ‘the science is settled,’” he warned. “It’s the spirit of the Inquisition, the thought-police down the ages.”

But beneath the hyperbole, Abbott used his U.K. lecture for a more strategic purpose. With the death of Australia’s proposed Clean Energy Target, the energy minister Josh Frydenberg was working on a new policy to put to the Liberal-National Party coalition government’s party room. Abbott was spelling out the demands of climate-sceptic Members of Parliament that he wanted met. First, he said, no subsidies for renewable energy. Second, he wanted the federal government to fund a new coal plant. “Given the nervousness of private investors, there must be a government-built coal-fired power station to overcome political risk,” Abbott demanded.

This was politically impossible for Prime Minister Malcolm Turnbull. If Turnbull agreed to build a new coal-fired power station in Australia, it would destroy his political credibility. But Abbott would press this demand and rally his allies against Turnbull.

In July 2018, Abbott turned up the pressure. Echoing President Donald Trump, he called on Turnbull’s government to pull out of the Paris Agreement. He was soon backed up by the right-wing think tank, The Institute of Public Affairs and its skeptic stalwarts, iron ore billionaire, Gina Rinehart and mining entrepreneur, Hugh Morgan who still held huge sway in the Liberal Party. That month had delivered a big problem for Turnbull and Frydenberg. On July 28, five federal by-elections were held across the country and, in a huge setback for Turnbull, the government failed to win even one of them.

The losses entrenched the view in the Queensland members of the Coalition that Turnbull was no longer a winner. If the result was repeated at the next election, the Coalition would be wiped out in that state. At this point, Turnbull lost the support of his influential home affairs minister, Peter Dutton, who had little interest in climate policy, but did hold a marginal seat in Queensland.

For Turnbull’s ally, Craig Laundy, the by-election losses were the beginning of the end. Enough numbers in the party room were moving to put Turnbull’s leadership in play: “When you add all the Liberal Party members and senators in Queensland who have been spooked to the rump of [the parliamentary pro-coal lobby] the Monash Forum, you get to mid- to high twenties without blinking. Then what happens? Sky News kicks on inside Parliament House and they are just obsessed and infatuated with two agendas. One, tear down Malcolm. And two, use climate change to do it.”

Do you have a story about corruption, fraud, or abuse of power?

ICIJ accepts information about wrongdoing by corporate, government or public services around the world. We do our utmost to guarantee the confidentiality of our sources.

The Turnbull government’s new climate and energy policy, the National Energy Guarantee or NEG quickly turned into the vehicle to destabilize Turnbull. Reports appeared that Abbott and the climate-skeptic rebels would cross the floor if Frydenberg tried to bring the NEG into parliament for a vote. Turnbull and Frydenberg at first tried to stare the rebels down, arguing the policy had been signed off by cabinet and supported in the party room.

“Abbott was trenchantly opposed, but certainly the feedback that Josh was giving us was that, apart from Tony, we probably wouldn’t have any floor-crossers. That was his view,” Turnbull recalled. “The opposition that blew up in the last week or so of my prime ministership was well beyond anything that Josh had anticipated, or at least in so far as I was aware. And it was being whipped up and supported in the media by the usual suspects in the traditional way.” By this stage, numbers men for Home Affairs Minister Dutton and Treasurer Scott Morrison were already head-counting. In a series of humiliating backdowns to appease the rebels, Turnbull and Frydenberg finally ended up ditching their greenhouse emissions target from the NEG legislation altogether, stunning the government’s business allies and state energy ministers. That week, Abbott watched Turnbull buckling and saw his leadership bleeding away.

“There was the first major adjustment to the NEG,” said Abbott, recalling Turnbull’s retreat. “He’d told the party room that the emissions reduction targets were going to be put into legislation to stop the Labor Party increasing them and then he suddenly announced, for God knows what reason, on the Friday night that was no longer going to be the case. [On Monday] Malcolm went into the prime ministerial courtyard and dumped the whole policy because, while he might have been able to get it through the parliament with the Labor Party support, he couldn’t get the support of the Coalition party room for it.

“The NEG was fatal to his leadership,” Abbott said bluntly. “Dropping it was fatal. But keeping it would have been fatal too.”

Jay Weatherill, who had lost the premiership of South Australia four months earlier, looked in despair at the triumph, yet again, of the climate sceptics, in the Coalition party room: “Everyone has been dancing in circles around a bunch of climate deniers. But until you actually stand in the middle of Martin Place and say ‘I am a climate denier’ they are not going to be satisfied,” he said later.

“It was never about energy policy, it was about killing Malcolm. Malcolm didn’t realise he was dealing with political terrorists. They were never interested in negotiating a result. There was only one result they were interested in and that was killing him. And the way they killed him was to destroy his credibility.”

‘Dirty Gold’ chases ‘three amigos’ from Miami to Peru and beyond

In a final attempt to save his job, Turnbull moved a surprise leadership spill on August 21. Abbott was sitting next to Dutton: “I said to Dutts, ‘Someone’s got to run,’ and Dutts said, ‘Well I’m going to.’” Dutton lost, 35 votes to 48, but Turnbull was mortally wounded. The next day his top cabinet ministers began to defect. Mathias Cormann, the finance minister, was counting Dutton’s numbers, and Morrison’s backers were also hard at work.

Turnbull couldn’t comprehend how the climate and energy policy had been used to undermine him when it had been supported by every cabinet minister. “Mathias was strongly in favour of the NEG, as was Scott. No dissent in cabinet. There was no one running interference in cabinet,” Turnbull recalled. “Mathias and I worked closely together. His conduct was never explained by him.”

In the final ballot for the Liberal leadership, Scott Morrison emerged the victor after key Turnbull supporters swung his way to block Dutton. At his last press conference at Parliament House, Turnbull blamed those he called “the wreckers” for bringing him down. “So, insofar as there has been chaos this week, it has been created by the wreckers,” he told reporters. “I have done everything I can to maintain the stability of government and the stability of the Party. But, of course, if people are determined to wreck, then we know they will continue to do so.” With his family at his side, Turnbull walked away from parliament house. The Liberal Party leader who had argued long and loud for climate science was gone. Whether he fought the climate skeptics head-on, as he did as opposition leader, or tried to appease them, as he did as prime minister, he could never defeat them.  Climate and energy policy would remain hostage to the Coalition’s skeptics and their allies for now. After all, the new prime minister had famously held aloft a lump of coal in parliament.

Extract from The Carbon Club by Marian Wilkinson, published by Allen & Unwin, Sydney, 2020.